I'm a Software Developer. I work for Red Hat

One of the predominant patterns in today's Node.js applications is the microservice, or µ-service. Applications are composed of a suite of independently deployable services, usually running in independent processes. These µ-services typically communicate with each other using lightweight protocols such as REST over HTTP.

One of the side effects of this architecture, however, is that applications need to be designed to handle failure. Any one of the service calls could fail for any number of reasons at any time. Today, I'll explore one method you can employ to gracefully handle service unavailability — the Circuit Breaker pattern.

Let's imagine an application, built on µ-services. Clients connect to the application through some kind of load balancer, and requests are then routed to a set of containers, each running multiple Node.js server processes. Those processes, in turn, depend on several µ-services not exposed to the clients. 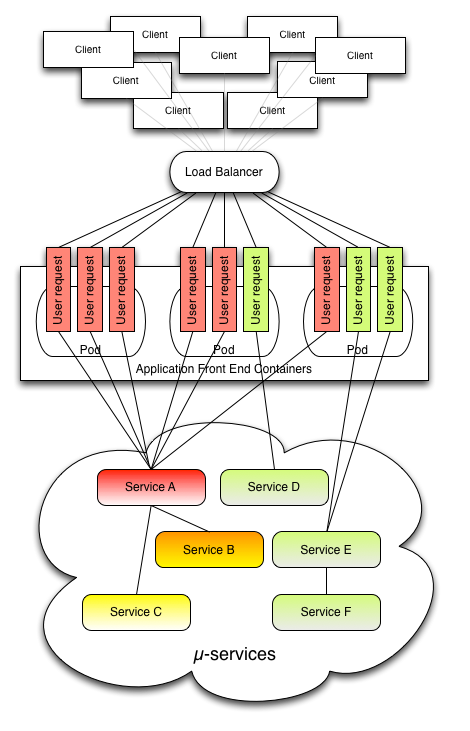 In the diagram shown, services B and C are starting to become flakey, take too long or outright fail. What's worse, service A depends on B and C to do its job, and the problems on B & C are beginning to cascade, causing requests to service A to time out. This cascading failure then works its way up to the Node.js server processes, causing them to timeout or fail. All of this is chewing up valuable resources and almost certainly resulting in an unpleasant experience for the end user.

To avoid these kinds of scenarios, circuit breakers allow us to easily monitor the state of our service dependencies. When a service begins to fail too frequently, the circuit will open and the client will go into fallback or fail-fast mode, avoiding calls to the faulty service altogether for a while, allowing it some time to recover. After a configurable timeout period, the circuit breaker will enter the halfOpen state. In this state, it will make a single call to the faulty service. If that call is successful, the circuit will close and clients will resume as normal. However, if the call to the service while in the halfOpen state fails, the circuit will immediately open again, preventing further requests to the service.

There are a few different circuit breaker implementations for Node.js currently published. For this example, we'll be using Opossum. One of the nice features of this implementation is that it works well both with Promises and standard Node.js-style calllback functions. Additionally, Opossum works both as a Node.js package and in the browser. We'll look at examples of all of these.

Networking with Circuit Breakers and Promises

Let's say Service A provides a simple REST service that exposes a user's unread message count. When a user is logged in, the server is periodically polled for this count, generating a GET request from the front-end server to the service URL at https://service-a.local/messages/[userid]/unread.

The first thing we need to do is set up our circuit so that it can make a simple HTTP GET call. In this case, we are using a client package called roi which will perform an HTTP GET request for a given endpoint and return a Promise.

We also provide a simplified fallback function that returns a resolved Promise with a friendly error message.

Next, let's create a function to get a user's unread messages. Here we fire the circuit, passing it parameters for the call to client.get() which is the circuit's action. Since Opossum uses a Promise API, we manage our flow control with then() and catch(), each of which accepts a function. If the call is successful, or if the fallback function is executed, the then function is applied. In the event of an error, the catch function is applied.

Then we configure our HTTP server. I don't show the full server setup here, just the parts we care about right now. Let's create a route to /messages/unread that fires the circuit.

And that's it. Now, when our web server makes a call to Service A, if that service starts failing or timing out, we can handle those failures gracefully.

OK, well that's all fine and dandy, but not everything uses Promises. Consider, for example, file system operations in Node.js. These async calls might easily fail. No worries, it's simple to add a circuit breaker to these calls by using Opossum's promisify function.

Circuit breakers can be very useful in the browser for handling remote asynchronous calls. It's pretty simple to wire up your AJAX calls to use the circuit breaker pattern, freeing them from convoluted error handling, duplicated code, and flakey backend services.

Start by adding the opossum-min.js file to your HTML document.

Next, install opossum and add it to package.json with the --save option.

The browserified files will be in node_modules/opossum/dist/opossum[-min].js. Then you'll need to let your server know where to find it.

Set a route to the browserified file. In this example, I'm using Hapi.js but most (all?) Node.js server frameworks provide some mechanism for serving static files for a given route.

When the browser loads the opossum-min.js file, a circuitBreaker function will become available in the global scope. You can use it to create circuit breakers that guard against your JQuery AJAX calls.

Opossum provides a number of events you can listen for so that you can effectively log or otherwise more finely control the behavior of the circuit. An example might be that we'd like to log an error message each time our fallback function is applied.

Or send a notification to some poor sysadmin every time the circuit opens.

For more information on the many events you can listen for, documentation about the configuration, and the overall API, please refer to the documentation for opossum.

If you are unfamiliar wtih the µ-service pattern and want to learn more there are plenty of good resources on the web. Here are a couple of places you might want to start.

Opossum itself was inspired by a few different existing circuit breaker implementations in Node.js. Here are a couple that were particularly useful for study.